One of the ‘enfants terribles’ of Soviet Non-Conformist art, co-organiser of the infamous ‘Bulldozer’ exhibition of 1974, Rukhin was born into a family of scientists in Saratov.

After finishing geological school, he used his training to combine paradoxical elements on the same canvas, in a sort of Soviet Pop Art style. Following a personal exhibition in the foyer of a Leningrad cinema, Rukhin exhibited in New York in the Betty Persons Gallery, after which time his work became increasingly raw in its style, conveying a sense of unease and metaphysical grief.

A subsequent visit to the Russian North saw icons become an increasing feature of his work, alongside three-dimensional motifs, and Rukhin became ever more active and brave in his relations with the Soviet state. He thus became something of a target for the authorities, and died in a fire in his studio, which some said was started deliberately. 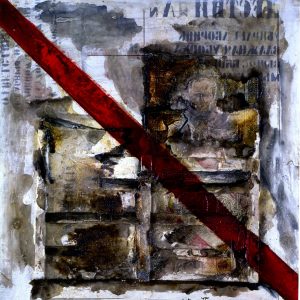