Born in Odessa in the Ukraine, at 18 Pavil travelled to Paris where he was to settle permanently, becoming a French citizen in 1911. After studying at the Académie Julian, he first exhibited in Paris in 1904 at the Salon des Peintres de Paris. The city was his subject – the light and colour of the Seine, boulevards, gardens, street scenes ­– captured in paintings that Claude Monet called ‘little marvels’. In 1930 Pavil was made Chevalier de la Légion d’Honneur, and moved to Morocco to live with his daughter, continuing to paint in the souks and in the port at Rabat, until his death in 1948. 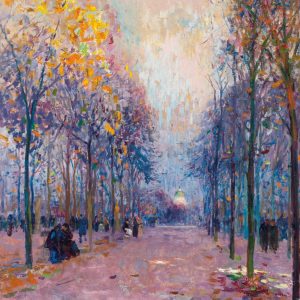