Born the son of an icon painter in Borisovka, 50 miles north of Kharkov. From 1914-17 he worked as a stage-painter and contributed to the satirical magazine Budilnik (‘Alarm-Clock’). He then studied at the Moscow School of Painting & Sculpture with Malevich and Exter, whose Kiev studio he joined in 1918 – meeting Anatoly Petritsky, who became a lifelong friend. From 1919-21 designed posters and billboards for Agitprop, and (along with Yermilov) window-displays for the Ukraine Telegraph Agency. Worked as a set-designer on Mayakovsky’s Mystery-Bouffe (1921), a projected version of Prokofiev’s Love of Three Oranges (1926) and Glière’s Red Poppy (1929), becoming Artistic Director of the new Kharkov Theatre of Opera & Ballet. He also taught at the Kharkov Arts Institute, emerging as a leading light in Ukrainian Constructivism, and joined the Ukraine Association of Revolutionary Art. He was named Artistic Director of the Kiev Opera in 1946, winning a Stalin Silver Medal in 1949. 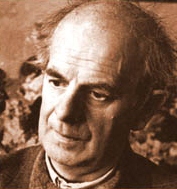 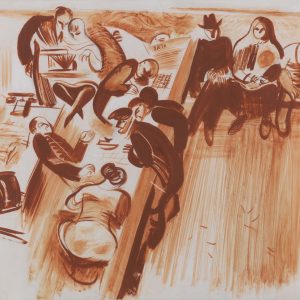