“James Butterwick, the London collector and dealer – is one of the leading authorities on Ukrainian and Russian Art in the West today.” ART.RU 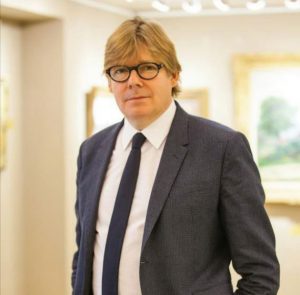 James Butterwick was born in 1962 in Maidenhead, 30 miles west of London. His grandfather, Cyril Butterwick was Head of Silver at Sotheby’s, London and his godfather Peregrine Pollen, President in New York. After taking A-levels in History, French and History of Art at Eton College. In 1985, James made his first trip to the Soviet Union, studying Russian in Minsk and Pyatigorsk before graduating in Russian & Fine Art from Bristol University in 1987 and embarking on his art world career:

1990Teams up with London dealer in Russian Art David Harrington

1995Starts own collection with works by Vrubel, Serov, Volkov & GrigorievElected only foreign member of the Russian Society of Private Collectors

2005Relocates his art business to London

2014
Exhibits ‘Alexander Bogomazov. Master of Cubo-Futurism’, at the Central House of Artists, Moscow.

2016Returns to TEFAF with a highly acclaimed show of Oleksandr Bohomazov (1880-1930) with further sales to Kroller-Muller.

2019March – ‘Oleksandr Bohomazov – The Lost Futurist’, exhibition at TEFAF MaastrichtJune – exhibits at ‘Masterpiece, London’ for the first timeJuly – moves to purpose-built gallery in Bruton Street, MayfairJuly – becomes an accredited lecturer at the Arts Society, London. Begins series of national lectures, “Dark side of the boom – the mass faking of the Russian Avant Garde” and “Oleksandr Bohomazov – the lost genius of the Ukraine”

2020February – wins landmark court case against the organisers of “Avangardie Russe dal Cubofuturismo al Suprematismo” exhibition in Mantua, Italy which he had described as a ‘disgrace’March – ‘Yakov Chernikhov – the Soviet Piranesi’ exhibition at TEFAF, Maastricht. Sells Oleksandr Bohomazov’s 1916 ‘Self Portrait’ to the Kröller-Müller Museum

2021Delivers a talk at the seminal Ludwig Museum exhibition, ‘Original and Fake’Opens his first exhibition of contemporary art, ‘Three Ukrainian Artists’, in London

In his spare time James enjoys fishing and ‘bestriding the open spaces of Norfolk in search of peace and quiet’. A lifelong supporter of The Arsenal, he seldom misses a game at the Emirates – however hectic his schedule.

Before the war, James travelled regularly to Ukraine where he opened a representative office in 2018. James’ gallery is in Brook Street, yards from Bond Street, the hub of the art world. Begins preparation for “Oleksandr Bohomazov- Ukrainian Renaissance’, at TEFAF 2022.

James Butterwick began collecting and selling Ukrainian and Russian Art in 1985 and has established himself as one of the world’s leading dealers and experts in the field. During the 1990s he lived in Moscow, becoming the only foreign member of the Russian Society of Private Collectors, forming collections, contributing to museum exhibitions and reading lectures on the history of Russian Art. In 2008 James became the only foreign member of International Confederation of Antique and Art Dealers of Russia and the CIS, and in 2013 joined the Society of London Art Dealers, the leading group of its kind.

In 2015 James became to first dealer in Ukrainian and Russian Art to be invited to exhibit at TEFAF, Maastricht Art Fair, showing a collection of works by Avant Garde painters, including the Ukrainian, Oleksandr Bohomazov (1880-1930), seven of whose works he sold to the Kröller Müller Museum in the Netherlands. Following this, James exhibited at TEFAF, New York in 2017, and continues to exhibit at Maastricht.

A fluent Russian speaker, James lectures around the world on issues of authenticity that surround the Ukrainian and Russian Avant Garde. He has spoken at the Tretyakov Gallery, the Museum of Russian Impressionism in Moscow, New York and Cambridge Universities, the Kiev Centre of International Relations and, in January 2021 he spoke at the seminal exhibition ‘Original or Fake’, at the Ludwig Museum, Cologne. He further lectures on Bohomazov, the Lost Futurist of Ukraine. A regular on radio and television, James had his own slot of Radio Matryoshka in London and featured in the BBC programme ‘Fake or Fortune’ in 2014.

James has written extensively on Ukrainian and Russian Art, has published sixteen exhibition catalogues and leant extensively to museum exhibitions. In February 2020 James won a landmark court case in Milan, Italy. Sued by organisers for having described an exhibition of 67 dubious paintings in Mantua as ‘an absolute disgrace’, James was utterly exonerated with the judge describing his comments as being based on, ‘proven recognised competence and experience.’

James acts as a source of museum-quality paintings with flawless provenance from both the Ukrainian, Russian and European School, and has access to a wide range of leading experts, private collections and museums. Before the war, from 2013, he travelled regularly to Ukraine, opening a representative office headed by Katya Vozianova in 2018. James’s office is in Brook Street yards from Bond Street, the hub of the art world.