James Butterwick and San Francisco-based gallery Modernism Inc. are delighted to present a survey of work by Ukrainian artist Oleksandr Bohomazov (1880-1930) for this year’s edition of TEFAF, commencing 25 June 2022.

The exhibition comes at a time of heightened interest in Bohomazov. Following this presentation, his work can be seen in two shows, at the Thyssen-Bornemisza National Museum, Madrid, in October 2022 and at the Museum Ludwig, Cologne, in March 2023.

As with many artists who lived in the former Soviet Union, Bohomazov only came to global attention with the collapse of Communism in the 1990s. Since then, he has had solo exhibitions at the National Museum of Ukrainian Art, Kyiv, Musée d’Art Moderne, Toulouse, France, the State Russian Museum, St Petersburg, and has appeared in group shows focussing on Modernism in Ukraine, notably Crossroads: Ukrainian Modernism 1910-1930, staged in New York and Chicago. His work is held in important private and public collections, amongst them MOMA, New York and the Kröller Müller Museum, Netherlands.

Born in 1880, Bohomazov was a pivotal figure in the Ukrainian avant-garde alongside Alexandra Ekster and the progenitor of Suprematism, Kazimir Malevich, with whom he taught at the Kyiv Academy of Arts. In 1920, he was part of the Ukrainian Agitprop Movement with Ekster before forming the Association of Revolutionary Masters of Ukraine in 1925. The art historian Andrei Nakov ranks him amongst the group of artists that includes not only Ekster and Malevich, but also Natalia Goncharova and Lyubov Popova. 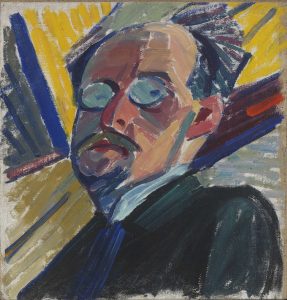 The TEFAF presentation, Oleksandr Bohomazov: Ukrainian Renaissance, compromises oils and works on paper created between 1908 and 1929, the year before the artist’s death from tuberculosis aged fifty. One of the highlights is Self-Portrait, 1914-1915, which reveals the influence of the Italian Futurists. Writing in 2019, Nakov said that he considered Bohomazov the ‘only true Futurist’ outside Moscow. In the painting, with chin tilted, Bohomazov’s pinprick eyes peer out interrogatively from oval pince-nez, the angularity of his face accentuated by dashes of paint. Intentional or not, the national colours of Ukraine, yellow and blue, appear in the background.

Also featured are paintings created between 1915-16 whilst Bohomazov was teaching in modern-day Nagorno-Karabakh in the Caucasus, years which saw an experimental shift in his artistic practice. Without the title, Landscape, Caucasus (undulating composition), 1915, would appear to be a work of pure abstraction, the sumptuous swirls transforming the countryside into a surging ocean of pinks, purples and reds. 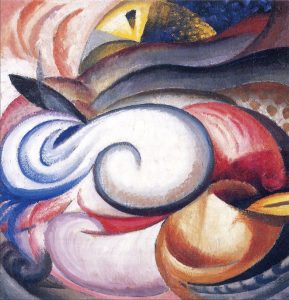 His wife, Wanda, whom he met while they were pupils at the Kyiv Academy was his inspiration, and this is reflected in five works. A pen and ink work, Wanda Monastryrska in front of a New Year Tree, 1911, was executed eighteen months before they married. At first glance, it appears like a woodcut, but closer inspection reveals a confident hand with pen and brush deployed masterfully, capturing in the sideways set of her eyes a sense of wariness, even perhaps suspicion of her husband-to-be.

Bohomazov produced more than 300 preparatory sketches for his most famous work, Sawyers, a triptych created between 1925 and 1929. This had been believed to be two paintings until 2014 when it was discovered the artist intended it to be three. To complete the trio, James Butterwick commissioned the artist Vitaly Maiboroda to paint the third and the only known watercolour of the left-hand section, Rolling the Logs, 1928-29, is also featured in this presentation. 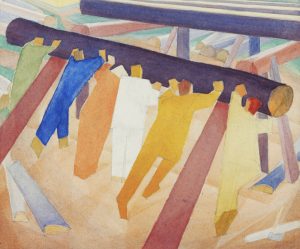 James Butterwick and Modernism Inc. will be donating 15 per cent of the profit from the sale of all artworks sold at TEFAF to the United Kingdom for UNHCR’s Ukraine Emergency Appeal.

“It is so inspiring to see the art community come together to support refugees. We are incredibly grateful to James Butterwick for raising more than £84,000 for UK for UNHCR’s Ukraine Emergency appeal. Every donation helps UN Refugee Agency teams in Ukraine and neighbouring countries to scale up their work, providing protection and essential practical supplies to refugees and their families such as clothes, shelter materials and hygiene kits, as well as emergency cash and food assistance.”