All too rare are the occasions when one can praise, not bury, a cultural event that takes place in Ukraine. The personal exhibition of Bohomazov at NAMU, ‘Creative Laboratory’, in 2019 was a fine demonstration of a great artist, it deserved greater exposure, but I would hesitate to name it, ‘international class’. There were too many gaps in the story, too few masterpieces. In part, this was no fault of the organisers, Konstantin Grigorichshin’s collection remains under arrest in Russia, but the involvement of European collectors might have given the exhibition a broader scope and access to these collections and collectors was, and remains, available. Nonetheless, the exhibition was, in my opinion, impressive.

It is difficult to level any criticism at the exhibition, ‘Futuromarennia’ open at the Arsenal complex in Kyiv till 30 January 2022. Those who seek to discover, remake or re-brand Ukrainian Art would do themselves a major service by visiting a show where, and the curators are to be heartily congratulated, a consensus has taken place with a number of major Ukrainian museums and private collectors. This agreement, with loans from the museum of Kharkov, the Theatrical Museum, the Arsenal itself and the Museum of Literary Archives, gives the exhibition far greater range and depth.

Putting the movement of Futurism in its Ukrainian context is a smart move. Though definition of the word ‘futurist’ has not always been clear, the exhibition should be seen as more a display of various ‘modernist tendencies’ active in Ukraine from 1910 onwards. This movement was indeed ‘futurist’, in terms of experimentation but does not always conform to the notion that futurism concentrated on dynamics, industrialisation and the new, mechanised, world.

Therefore, putting definitions to one side, it is fair to say that this is a very fine exhibition.

Entering the cavernous Arsenal one is encountered by a lovely little trick, a piano hanging upside down on the background of a vast Futurist Manifesto. This, immediately, gives the exhibition its Ukrainian slant for it was in Odessa in 1914 where Kamensky first performed the trick. It is also fact that, in David Burliuk, the Ukrainians have found one of their own as a co-founder of the Futurist movement in Russia which, in turn, spilled over into Ukraine.

It is Burliuk’s magnificent 1910’s portrait ‘Time’, that heralds the start of the exhibition. The sheer craziness of the painting, inverted railway carriages, telegraph poles, swirls and chaotic rhythms marks this painting as firmly from the definitive Futurist canon. 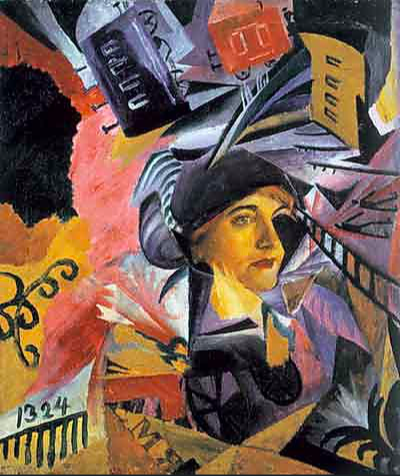 Burliuk was a regular visitor to a display that features large in the exhibition. Krasnaya Polyana, outside Kharkov, was home to the Sinyakova sisters and the house in which, according to Mayakovsky’s lover, Lily Brik, ‘Futurism was born’. 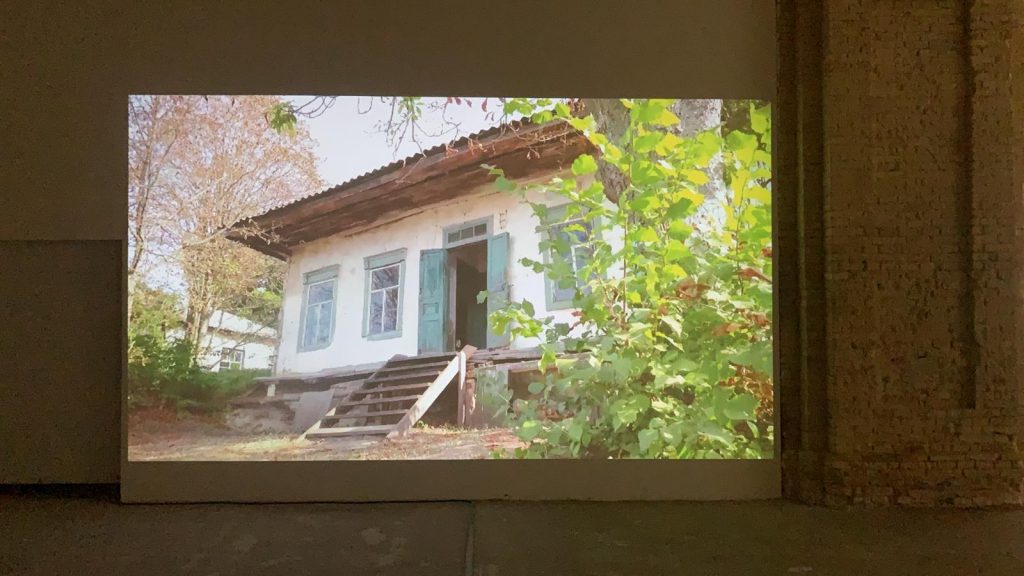 It seems senseless to argue where, or by whom, futurism was born but merely to state that the Ukraine played a major role in its foundation and the rebuilding of the Sinyakova home, a project known as, ‘Mecca of Futurism’ is of great importance. Aside from the Futurist poets, Khlebnikov, Aseev, Mayakovsky himself, that frequented the dacha, the so-called Ukrainian artists, Kosarev and Ermilov, both from nearby Kharkov, were also visitors. Between them and Maria Sinyakova, they created a revival of Ukrainian folklore in art. Sadly, the examples of Maria Sinyakova’s work at the exhibition are relatively small but the motifs, colour scheme and structure of her work in the three watercolours illustrated below is quintessentially Ukrainian.

The exhibition devotes an entire section to theatrical art, a wise decision as the Museum of the same name in Kiev is particularly well-stocked. Exter, Meller, Khvostenko-Khvostov but the star turn is provided by Anatoly Petritsky, another entirely eclectic artist whose wealth of imagination puts Ukrainian Theatrical Design in as high a bracket as that of its Western counterparts. Despite, seemingly, being heavily influenced by Lisstisky, Petritsky’s later work ploughs its own furrow, his work for ‘Turandot’ in particular.

Inevitably, the work of Oleksander Bohomazov, the one undeniable, by definition, ‘Futurist’ takes centre stage and many and varied are the works on show. A highly distinguished Western collector once argued that Bohomazov was a far greater draughtsman than painter and this exhibition gives considerable weight to that theory. ‘Fire, Kiev’ and ‘Landscape, Gerusia’ both from 1916 are cases in point. 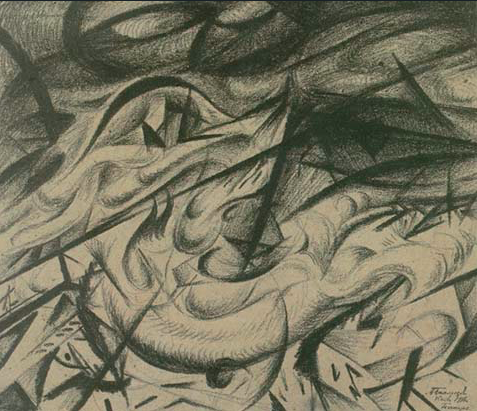 Hyperbole and alliteration aside, these are great, futurist, flights of fantasy. The dynamics, the movement, the technical mastery are a thing of wonder. The works are somehow alive.

This sense of speed, progress is repeated in the room dedicated to Dziga Vertov’s film, ‘Man with a Movie Camera’, another important aspect of the show putting into contact the futurist canon.

Highlights are many, lowlights few. I recommend highly this Kyiv exhibition demonstrating how Russian Futurism spilled over into the Ukraine and created a more national version of an international language. You can take a virtual tour (click on the green circles for English audio commentary).