In May this year “Small Art” exhibition opened in Moscow at the Jewish Museum and Tolerance Centre. We are delighted that two artworks from James Butterwick collection are now in Moscow on display. Here is a story about how these artworks became part of James’s collection.

My relationship with the Sokolov and Pavlov families began with a movie.

An enterprising film-maker, Noel Hardy, had contacted me about a series of original Soviet war posters acquired, how is not entirely clear, by his father Lionel, himself an artist which Noel had found in a box in his attic. Noel intended to call his film, ‘Russia’s fight is ours! Our fight is Russia’s!’

Having identified the artists as being the Kukriniksy, an artistic triumvirate who, to all intents and purposes were THE Soviet poster artists of the Second World War, a search began to find the surviving members. 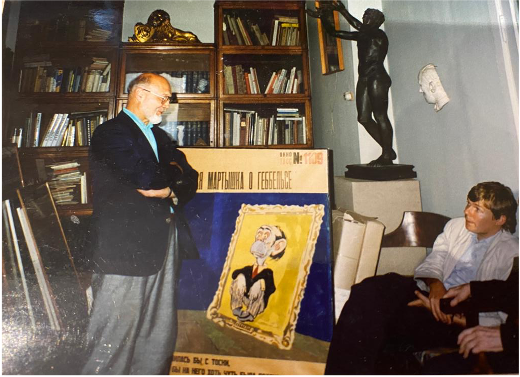 Misha Sokolov, James Butterwick, Moscow 1992 (The Kukriniksy poster in the background is of the, ‘Monkey Goebbels’)

Thus, through a friend in London, I became acquainted with Misha Sokolov, son of the ‘Niks’ part. They derived their names from an amalgam of surnames Ku – Kupreyanov, Kry – Krylov and Niks – Nikolai Sokolov. Misha, himself a fine landscape artist, was quiet, soft-spoken and friendly, his wife Maria was powerful and intelligent and herself the scion of Soviet Royalty – Pavlov, as in Pavlov’s dogs, was her grandfather and, himself an avid collector. Thus, we all met on July 5th 1992 at his flat on Ulitsa Chkalova.

It was love at first sight. 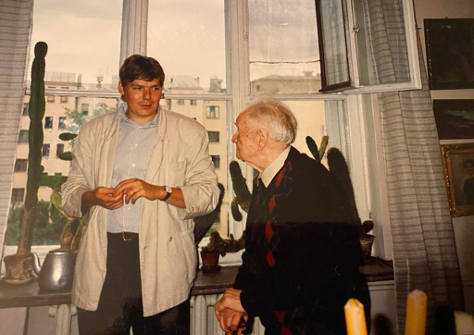 A small, slight, man of 89, with a distinct sparkle in his eyes, Sokolov charmed one and all. His memory was faultless, his difficulty at understanding the seismic changes afflicting his country understandable, Sokolov was perfect television material. He took a particular interest in my burgeoning desire to deal in Russian Art of the Golden Age and his own collection, consisting of works by all the great masters of the beginning of the century, was shown to me in an unusually abrupt manner.

“I’ve heard about you”, he intoned, “right, all the paintings on these walls, who are the artists?” I spluttered through my list but it was ridiculously easy as the works displayed, by Korovin, Serov, Golovin, Levitan or Polenov were all museum standard. I might as well have been in the Tretyakov. When I told him how much I admired his painting by Nikolai Sapunov (188-1912) he whistled and sat down. ‘He recognised Sapunov. Not even Grabar managed that!’ Being young, naïve and hugely impressionable I chose to believe his comment and, within a short space of time, we became friends. We started to embrace on meeting something that I was completely unused to except with my own, unusually for an Englishman, affectionate father.

Sokolov took me once into his study and withdrew a parcel of drawings from a desk. They were by Vrubel. A version of Tamara and Demon and a series of small caricatures, drawn when the artist was in a mental institution. The drawings, as if by a small child, were covered in obscenities. His collection of this crucial artist for the development of Russian Art was impressive, superb works on paper – even a small oil of ‘Lilacs’.

Sokolov was a mine of information, his house a trove of Soviet-treasures. He showed me a letter from Shostakovich thanking Sokolov for the gift of some socks when they were evacuated together from Moscow at the beginning of the war. Another letter was from Gorbachev thanking him for a gift. His reminiscences of Gorky, with whom he worked were fascinating. When I think back, he had probably told these stories, another was of a meeting with Bukharin lounging on a divan, many, many times, but he managed to imbue his story with life and vitality. He had seen the Tsar as a ten-year old, he described how the search for a model for Hitler for the Kukrinisky painting, ‘The End’ had been fraught with comic difficulties. His stories were endless. 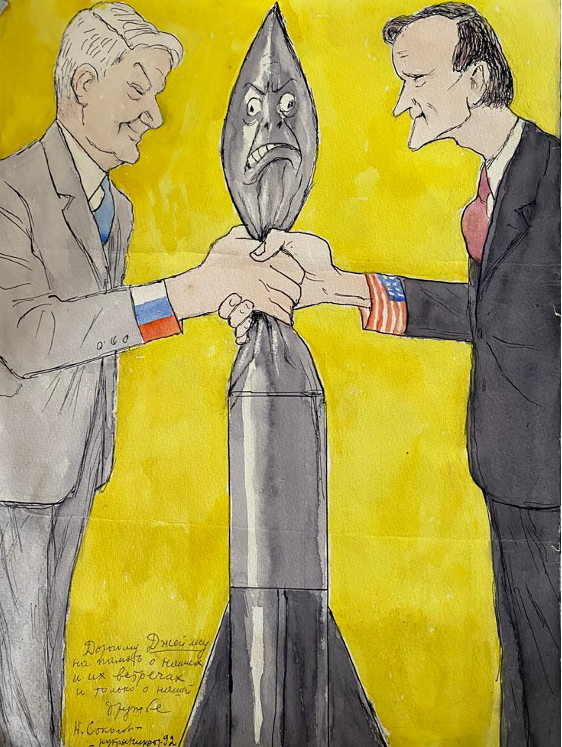 Clearly our conversations and my open-mouthed reactions, struck a chord with Sokolov for, on the last meeting with him, myself and Noel, he gave me an original, and very topical, watercolour as a gift. The START treaty was in the offing and Sokolov had drawn a very clever caricature of Yeltsin and Bush throttling a nuclear warhead entitled, ‘The Firm Handshake’. Interestingly, and as was the practice amongst the strange triumvirate, he signed it “N. Sokolov. Kukryniksy’. Above the signature he wrote, ‘to dear James, in memory of theirs and our meeting but only about our friendship.’ I still find the words incredibly touching, summing up for me what Russia, for all its faults, has given someone with a previously limited outlook. 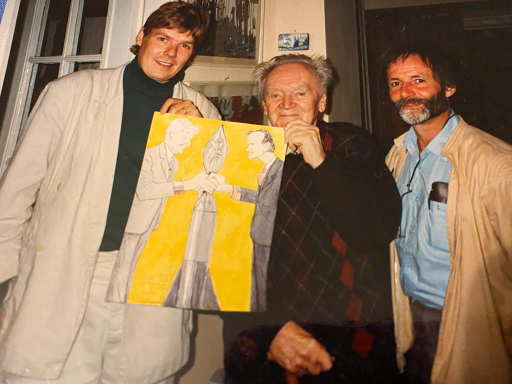 I had met Sokolov through his son Misha and wife, Manya who became, after I moved to Moscow in 1996, my surrogate parents. Their collection, the majority acquired from Manya’s father, the grandson of Ivan Petrovich Pavlov, concentrated more on Russian 19th century painting and was refined with superb works by Serov, Fyodor Vassiliev, Levitan and Aivasovsky. Misha fell ill soon after with cancer a disease he fought bravely until 1998, leaving the widowed Manya distraught. 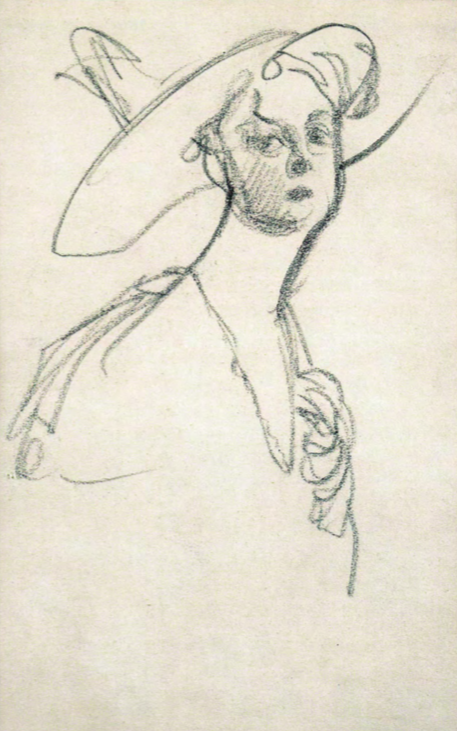 During his illness, and in need of money urgently, Misha and Manya sold me a drawing with which I had been in love from the day I first set eyes upon it. As a thank you for paying quickly and for being a friend, they gave me a marvellous present, a preparatory sketch to Serov’s ‘Portrait of Olga Orlova’. This portrait became my company logo and remained so for 25 years. 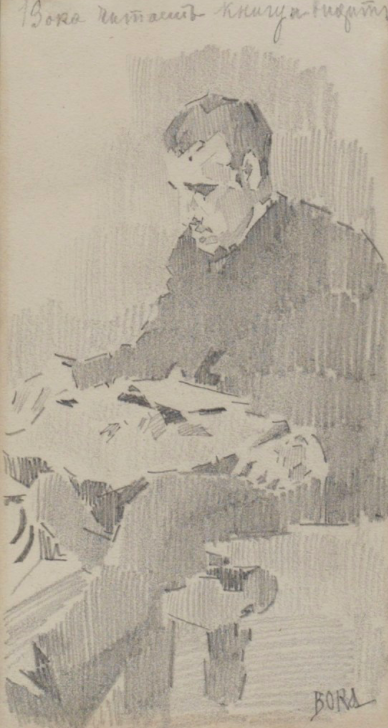 Unusually for Vrubel, the image of Mamontov appears to be formed from a series of vertical pencil strokes. It is difficult to imagine that the drawing, such was the artist’s mastery of technique, took him anything other than a few minutes but the effect is stunning. From the relatively haphazard style of the vertical lines the face is a study in detail, but detail a la Vrubel. The shading shows the lightest touches of the pencil but the eyes are angular, likewise the beard. These almost cubist elements are repeated in the type face of the book that Mamontov is reading. The artist in the inscription tells the viewer that the sitter is reading but exactly what? The book is huge and on its surface are geometric motifs. How is this possible in the 1890’s? Herewith is the mystery of Vrubel revealed, an artist whom, to all intents and purposes was a cubist. In a Channel 4 documentary on Russian Art, Andrew Graham-Dixon drew attention to this when his eyes alighted on ‘Demon Seated’. Somehow Vrubel has always remained a safely-guarded secret, warm in the grasp of Russia, the powers that be somehow unwilling to let him go, to be seen by others. 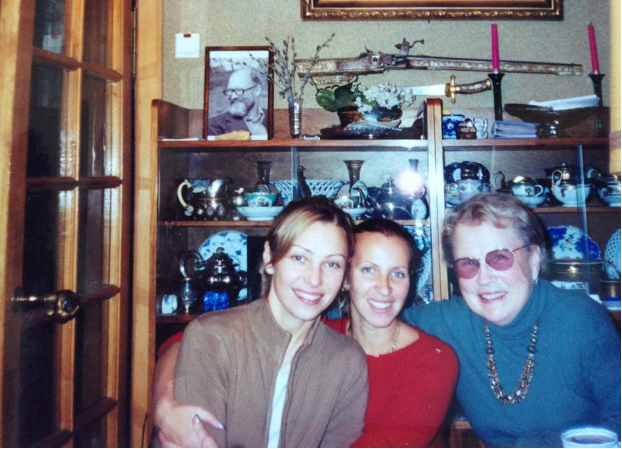 My visits to Maria Vladimirovna became regular. The friendship was deep, as was the subsequent friendship with Katya, her daughter, herself an artist living in Warsaw. We would discuss art until the small hours and in 2005, at the invitation of an Indian friend, we spent a week travelling around Northern India. Delhi, Agra, Jaipur and Udaipur were all visited, the latter especially memorable for the trip to the Jain temple at Ranakpur.

Shortly after the trip ‘Mother’ gave me the small oil by Polenov. Her grandfather had acquired it direct from the artist, he was a boy from the local village, now Polenova, a glorious momento of a glorious and worthwhile friendship.