“An Epidemic of Russian Fakes” by Russian Art Focus

“The forgery industry, whose prices are irresistible, keeps fooling gullible lovers of Russian Avant-Garde. In a recent series of widely publicized scandals, the forgers’ tricks have been exposed by experts. These cases should serve as a warning for collectors…

…The art world recently hailed as a major victory the acquittal of prominent British dealer of Russian art James Butterwick in a libel case brought against him in Italy after he described as “an absolute disgrace” a three-month-long exhibition called ‘Russian Avant-Garde from Cubo-Futurism to Suprematism’. The show opened in the Italian city of Mantua at the end of 2013.

The exhibition’s organizers filed a civil lawsuit, accusing Butterwick of damaging their business reputation. However, an Italian judge ruled that “Butterwick expressed an opinion based on his proven and recognized competence and experience, which, although strongly stated, was never offensive or unfounded”. Butterwick was one of the 11 signatories of the letter sent over the Ghent exhibition”. 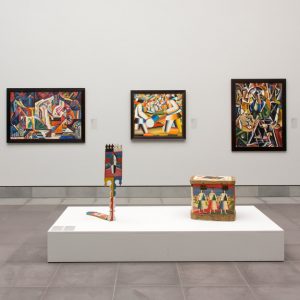