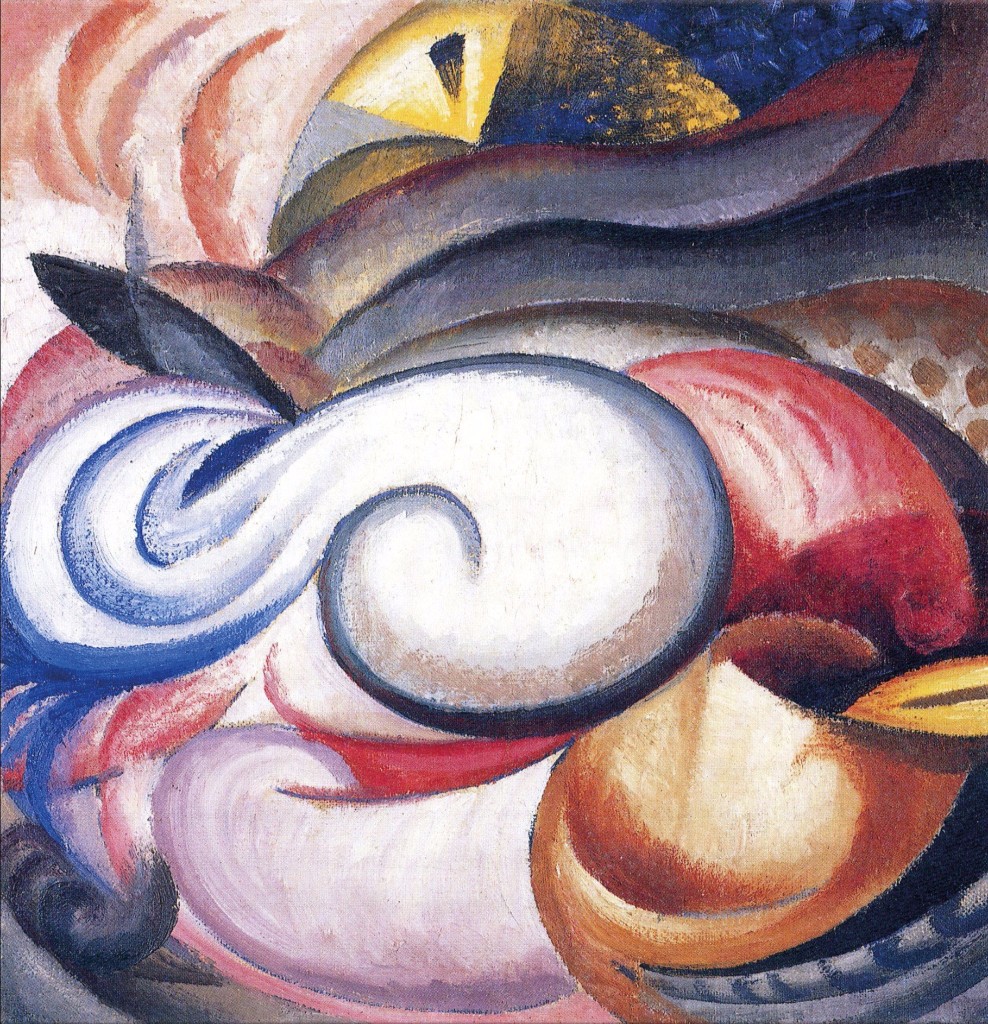 ‘The mountains are like a giant funnel where grandiose volumes twisted, crashed and collided’.
Alexander Bogomazov 1916

Bogomazov, being permanently impecunious, was forced into a number of menial jobs during his brief career. Such a job was that of teaching at a school in Geryusi in south east Armenia, on the border with Nagorno-Karabakh.

Once ensconced in his lodgings, Bogomazov endured considerable hardships. His daughter commented, ‘for the entire period of his stay in the Caucasus, my father experienced considerable financial difficulties. His pay was delayed, or not paid. There were shortages of fuel and food. He froze, having to cut down on logs, shoving paper into holes in the windows.’

It is something of an artistic cliché that the greatest works an artist produces are usually those produced under the most difficult of circumstances but this is certainly true ofBogomazov’s paintings from the Caucasus period.

He wrote to his wife, Wanda, ‘it is cold in the flat because, whilst waiting for fuel, I do not wish to waste the few sad logs I have. Sometimes I go and warm up at thepriest’s or the inspector’s. I have planted in a box ten bean seeds and an onion. It will be a veritable garden! I am warming myself up now by chopping up wood for picture stretchers’.

Nonetheless, the years 1915-1916 were the pinnacle of the artist’s life, the time of his greatestachievements and it is difficult to find a comparable artist in Western Europe painting in such a manner. The dynamics are powerful and subtle and one of the rare occasions when the quality of the oils by the artist matched those of his works on paper.

In compositional terms, we still have the geometric shapes of the cubist period but now with swirls, crescents, concaves and convexes. Movement and dynamism come from all sides and, were it not for the title, one would struggle to actually comprehend the nature of the painting and, it could be argued, it is one of the most abstract paintings that Bogomazov ever painted. Further to that, and unusually for the artist, there is no preparatory drawing. In this landscape the eye is transfixed by the swirls and movement that lead the eye upwards to what appears to be the night sky and yet the circular disc at the top appears to be the sun or, perhaps the piece is painted at twilight.

‘His work, unique in its manner, inscribes itself in the foremost ranks of Futurism and, apart from Balla, Boccioni and Franz Marc, we are hard-pressed to find other artists whose colouristic and pictorial quality, as well as sheer originality, could bear comparison.’
Andrei Nakov 1991